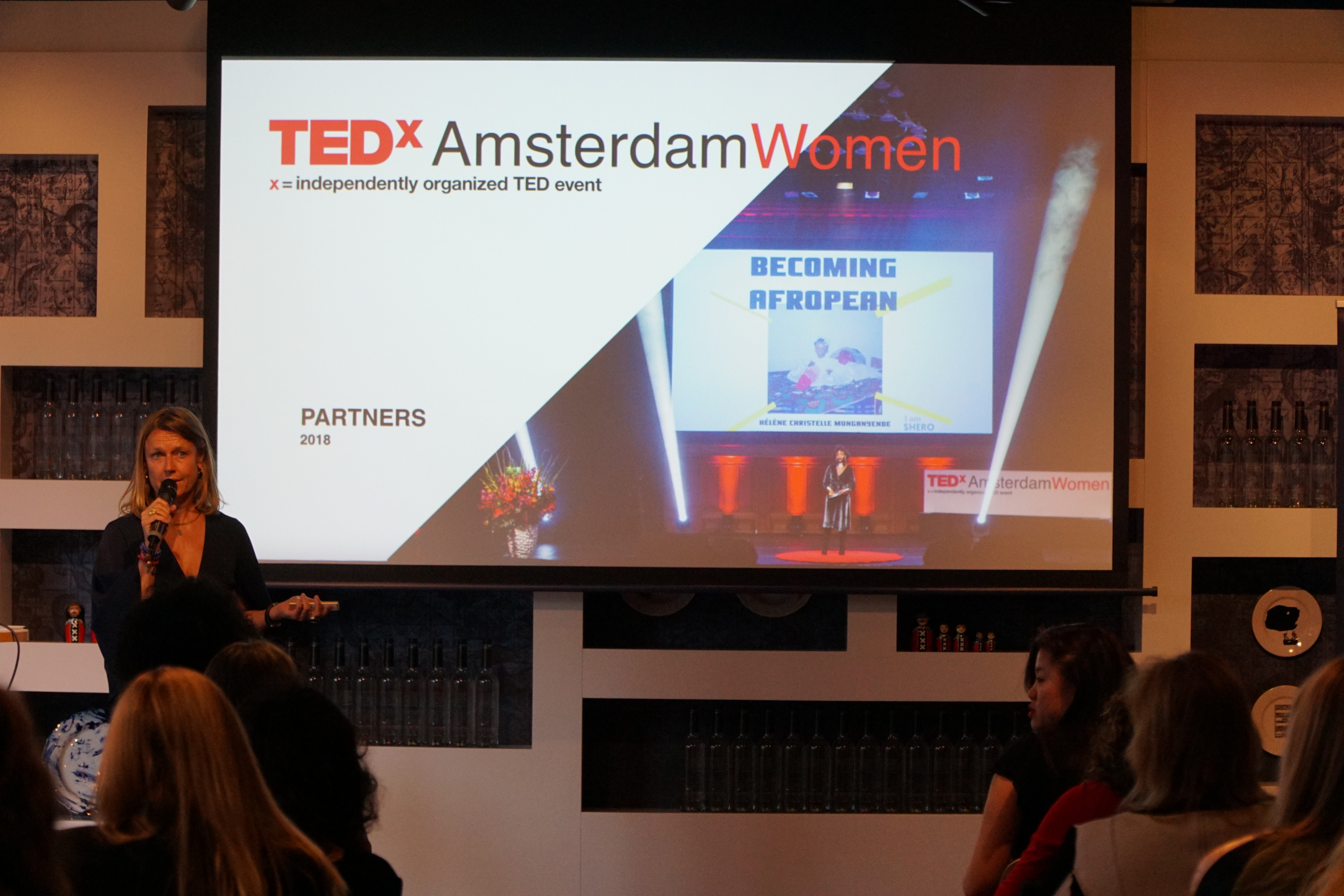 Appearing in great big letters on the powerpoint behind host Carine de Meyere, the words ‘You are stronger than you think you are’ succinctly encapsulate the emotion in the room at the event Friends of TEDxAmsterdamWomen in the lovely Andaz Hotel.

The first TEDxAmsterdamWomen-event of the year, held 17th April, 2018, presented volunteers and guests alike with the opportunity to celebrate the valued contributions of our past, current and future friends of the cause. Without their support, the extraordinary success of TEDxAmsterdamWomen in the eight years since its inception would simply not have been possible.

Offering a taster of our upcoming event later this year, three remarkable women took to the stage to share their stories. Together, they illustrated the benefits of an organisation which gives women the platform they deserve to inspire, engage and educate.

Interweaving these narratives was the chance for some of our volunteers to present the myriad events and opportunities spearheaded by TEDxAmsterdamWomen.

Marian Spier, the woman who made it all happen, described founding the organization in 2010 and its progress over the years. Remarkably, in 2018, TEDxAmsterdamWomen has had over 100 volunteers and 120 speakers from over 20 different countries.

Shenin Lebrun introduced Pitch Night, a concept which encourages 10 women to pitch the unique concept to a jury in three minutes, at an intimate event in celebration of creativity and innovation.

Nhi Phan described the rewards – both tangible and emotional – of the annual Startup Award event. This exciting award sees 11 female entrepreneurs competing to win business, and receives legal and financial coaching in order to maximise the full potential of their business plan. The audience was even offered a firsthand account of the experience from last year’s winner, Lotte Leufkens, and runner-up Christina Moreno, in an interview conducted by Ravi van Beeck.

Ilse van Gasteren from Clifford Chance rounded off the evening’s talks with an account of her experience with TEDxAmsterdamWomen. To-date, she has attended four TEDxAmsterdamWomen events, each of which have left her inspired and charged to ‘go for it’ in creating change for women and LGBT co-workers in her organization. A model of a woman who is inspiring, diversifying and, ultimately, reshaping the future.

The evening concluded with drinks and canapés. It was a great opportunity for all attendees to mingle, discuss what it means to be ‘Bridging the Gap’, and toast to an inspiring and empowering year ahead.

Interested in teaming up with TEDxAmsterdamWomen? If your organization would like to support women creating an impact in the world, please send us an email at partners@tedxamsterdamwomen.nl.