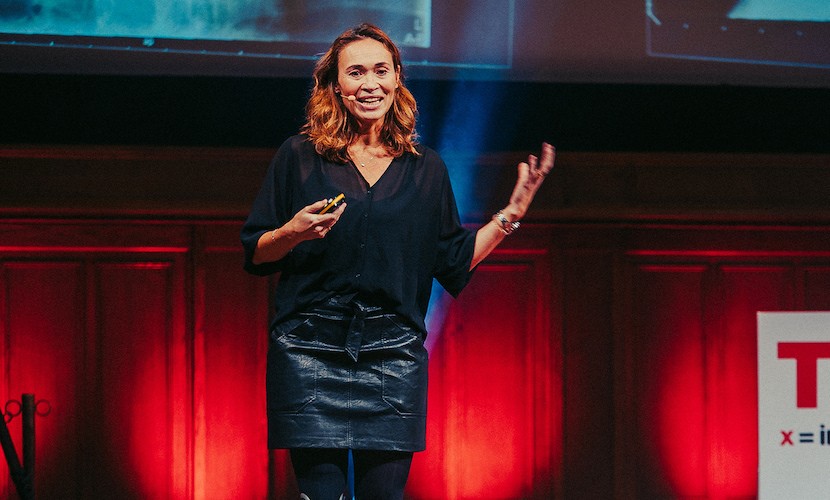 Dutch athlete and author Bibian Mentel Spee is unstoppable. Her impressive, emotional talk earned her a well-deserved standing ovation. Although she has struggled with recurring cancer, she doesn’t feel sorry for herself. She made it clear that this wasn’t a pity party, this was a talk to inspire others, and she certainly achieved this.

On her way to the Olympic games in Salt Lake City 2001 Bibian lost her leg due to bone cancer. The doctors told her that she could never snowboard again, but she didn’t give up. She has been a professional snowboarder ever since, and won the World Championship seven times and three Paralympic gold medals. However, the cancer came back several times and in 2016, the doctor told her that she was going to die. Her response illustrates her great attitude: that same evening, she went to a restaurant and celebrated life with her family. She persevered, although she had to have neck surgery in 2017. The disease has come back nine times during the last eighteen years and she has an appointment next week with her doctor, expecting to hear that the cancer is back.

But all of this doesn’t define her. She is an amazing athlete, the founder of the ‘Mentelity Foundation’‘ and a proud mother of three children. Bibian is often asked: “how do you stay positive with death on your doorstep?” She told the crowd to focus on your opportunities, be aware that you always have a choice in life, collect memories instead of chasing possessions and most importantly: “never ever stop dreaming and always keep following your passion”. Because according to Bibian, her life motto is: “Life is not measured by how many breaths we take but by the moments that take our breath away.”