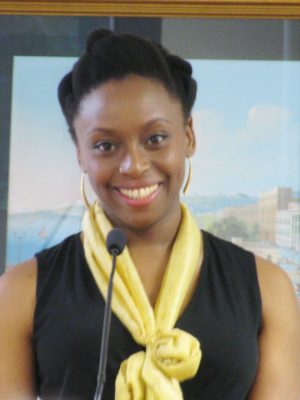 Feminism is the belief in the social, political, and economic equality of the sexes. However, it often comes with a negative meaning. Feminists are seen as angry women who do not want to fight for equal rights, but for the superiority of a gender. More pointedly, a radical moved by a dissatisfaction with men.

Due to this misconception, I decided to talk about a happy feminist.

Chimamanda Ngozi Adichie, born in 1977, is considered as one of the most prominent contemporary Nigerian writers. Many of you may not recognize her name, yet know parts of her speech since they were sampled in Beyonce's song Flawless.

We teach girls to shrink themselves, to make themselves smaller. We say to girls, 'You can have ambition, but not too much. You should aim to be successful, but not too successful. Otherwise you will threaten the man.' Because I am female, I am expected to aspire to marriage. I am expected to make my life choices always keeping in mind that marriage is the most important. Now marriage can be a source of joy and love and mutual support. But why do we teach girls to aspire to marriage and we don’t teach boys the same? We raise girls to see each other as competitors – not for jobs or for accomplishments, which I think can be a good thing, but for the attention of men. We teach girls that they cannot be sexual beings in the way that boys are. Feminist: the person who believes in the social, political and economic equality of the sexes.

We should all be feminists

In 2012, Adichie participated at TEDxEuston, where she delivered a powerful speech titled “We should all be feminists", which illustrated her struggle as a black, female, feminist. She spoke about her journey with the term ‘feminism’, which began at the age 14 when her friend, Okoloma Maduewesi, called her feminist. It was not intended as a compliment. Years later, Adichie became a successful writer, where a similar event occurred. While presenting one of her novels, a journalist kindly suggested that she not claim to be a feminist; feminists, from the journalist’s perspective, are women who are unhappy because they cannot find husbands.

These events catalyzed Adichie to modify her label as a feminist to a ’happy feminist.’

Anger is my motivation

But what about the anger? Adichie admits that anger is part of her motivation:

I am angry. Gender as it functions today is a grave injustice. We should all be angry. Anger has a long history of bringing about positive change; but, in addition to being angry, I'm also hopeful. Because I believe deeply in the ability of human beings to make and remake themselves for the better.

Even in the academic world, she has been antagonized by colleagues who suggest that feminism is not part of the African culture and, therefore, Adichie is letting Western culture corrupt her.

In her 2012 TEDtalk, Adichie offers several examples of how gender equality has yet to be reached, ranging from waiters who do not dare address a women to bouncers who will not let a woman enter a hotel alone without thinking she is a sex worker.

However, Adichie believes that in today’s world, the tendency is changing and the type of person more likely to lead is one who is more creative, more intelligent and more innovative… and there are no hormones for these attributes.

Watch Adichie's TED Talk and get some inspiration yourself!